A Greek, a Frenchman in New Zealand and a Dutchman, this is how Hans van Herk of Propagation Solutions knows, many crop advisers intended specifically for plant propagators. This is why he himself entered this specific branch in the last three years. Hans helps plant growers around the world to improve quality and, if necessary, solve growing problems during propagation. “From the moment I started, the questions kept coming.”

In the Netherlands there are propagators that have been around for over a hundred years, but in many other countries this is not the case. This means that Hans is now getting to know the propagators all over the world, as they face challenges or grow rapidly. “Did you know, for example, that Armenia now has 100 hectares of greenhouse tomatoes? I didn’t, but now I do. They want to do their own propagation for political reasons, but that also includes grafting. And they don’t have the experience yet. “

“Simple” advice
This is just one example of the questions the propagators ask Hans. He sees that there is a great need for specialist knowledge about propagation. “There are already a lot of good growers around the world with some knowledge of propagation, but at the same time, there are very few who really focus only on this fairly specialized market. I now work with both these “general” cultivation advisers and my directly specialized colleagues to help propagators and producers. “

The main issues that plant growers sometimes face are “almost always blindness and cluster quality” in tomatoes, but also the success rate of grafting and even shoots with pinched plants, notes Hans. In cucumber, great attention is also paid to the roots, just like in peppers, where the leaf surface also receives the necessary specialist attention.

As an example, he gives a Mexican propagator who had problems keeping the shoots regular. “There I was able to help them by removing a piece of leaf from the tomato plants that had two leaves on top. The two leaves should have an equal leaf area. If this is successful, the shoots will also remain more regular. For me, this is something relatively simple, but for them it turned out to be a real trick that improved the quality and consistency of shots by leaps and bounds. “

Special issues
More specific questions are also addressed. Hans regularly shares them on LinkedIn. “I get a lot of new clients this way.” As an example of peculiarities, Hans mentions the typical growth of a cucumber variety with many tendrils growing in the air, a grafted pinch tomato plant with three or four heads and the cultivation of grafted watermelon plants in large numbers in Mediterranean, which is not very common in the Netherlands. “In watermelon you have many seedless varieties which are difficult to graft and germinate. If it still succeeds with the propagator, it’s nice to show. “

Growth spurt
In the necessary countries, plant propagators, just like production producers, experience a growth spurt. Hans mentions “huge” nurseries in Argentina (yes, really!), Mexico and Canada. “In these countries, you see that they sometimes want to double the already considerable area in three years. Sometimes, I am also asked to give advice on the greenhouse to build. In this way, I also broaden my consultancy work and this can, for example, also concern the choice of concrete or cultivation tables; or on logistics in the company. Equally essential for the quality of the plants, which I believe is responsible for 40 percent of the ultimate success of a crop. “

Unlike the Netherlands, the supply chain for propagators abroad is much less specialized. “Here propagators can buy products from dozens of companies, all for a specific part of the culture. It’s different abroad and you see a more general offer. This causes problems and can increase the risk of errors. “ 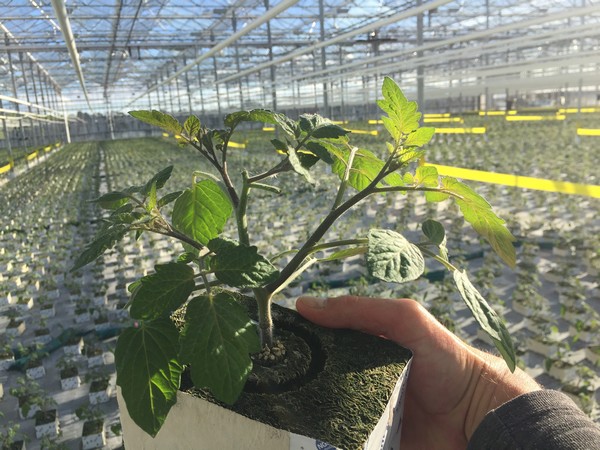 A pinched tomato with four sprouts, a so-called four heads.

Blind plants
Culture history and / or experience helps. Hans brings them with him, also from his previous job at a propagator and substrate supplier. For example with blind plants, a common problem that propagators face. “Today in tomatoes, almost always grafted and pinched on the second leaf, you see the problem occurring after the first cluster. It can also occur in pinched plants on the cotyledons. Partly this is a genetic predisposition of a breed, but you can both prevent it or make it worse.

When it comes to blind plants, Hans also remembers a Canadian propagator who suffered from it in peppers a few years ago. “Like his Dutch propagator colleagues, he wanted to classify plants. But the ten-day-old plants received such a shock from this selection that about a quarter of the plants became decapitated. This can often be solved in tomatoes because new growth appears, but in peppers it is much more difficult. By stopping selection early and only doing so at the time of transplanting, the problem was avoided. It did entail a bit of extra work, but in this case, it turned out to be the solution. “ 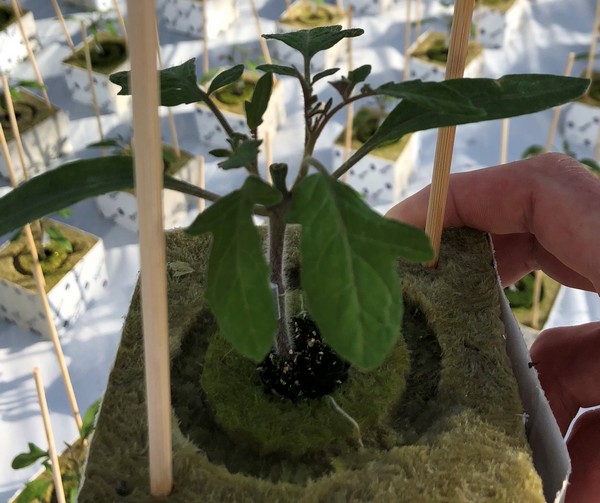 A tomato pinched on the cotyledons which is “very strong”

Seminar
Although much of the spread takes place in the winter, Hans is busy year round. Just like the multiplication elsewhere, which sometimes even cultivates all year round, in particular because of the enlightened cultures of tomato and cucumber. Hans has a client like this in Northern Europe.

At the moment, however, it is mostly watermelons. “From March to July, many propagators work there for culture in southern Europe. Then the light growing season will start again soon.

And in the fall of 2021 there will also be a seminar, co-organized by Hans. At the end of September, as it is, specialists from the world of international propagation will meet with Flier Systems and Grodan to examine the current challenges. ” I can not wait to be there. Hygiene will be at the top of the list, but other topics such as hybrid lights, biological control and resilient plants will also be covered. After all, everyone ultimately wants to grow the best plants, it’s always a fun game to play!

Mercedes-Maybach GLS 600 launched in India at ...